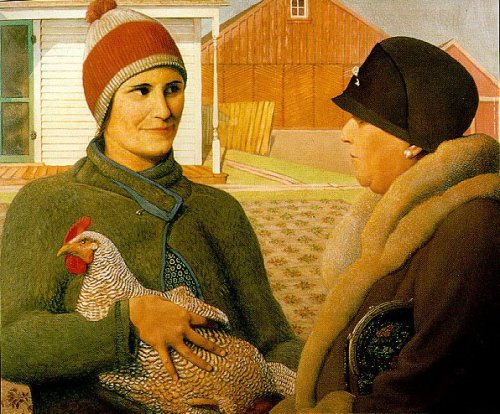 Some months ago I came across this painting by Grant Wood and fell in love with it. The chicken was beautiful and I thought the farm woman was, too. I got into imagining what was going on in this story. Did the rich lady (judging from her jewelry and beaded purse) wish to buy a chicken? For eggs? Or for her dinner? Or maybe she’s there for some other reason and the farm woman just happens to be holding a chicken. (Yeah, I guess that sounds silly, but she does seem to be cradling it rather tenderly.)

I thought of the image again when I was trying to figure out what to share with you this week. I thought a poem would be nice, and this one from Lois Beebe Hayna resonated with me. She’s a celebrated local poet, and I treasure her work. It has been featured on this blog and in Greenwoman Magazine, Issue #2. She turned 100 years old last spring.

The brown coat’s good for another
winter’s wear, one of the best
buys I ever made—a good warm coat
marked down. I wore it into town
this morning in the first hard frost,
and if I felt drab in it
and ‘country’—how else
can a woman my age expect to feel?

I sold my last good batch of eggs—
hens pretty much quit laying
when it gets cold. I made enough
to tide me till Christmas
and well into spring, if I’m careful.
I am always careful.

They were buttoning a red coat
on the fly-specked mannequin in Ebert’s
window—scarlet wool, with a jaunty flare
and a warm turned-up collar.
It drew me in, though I knew
it cost too much and anyway
this brown coat is still just fine.

It fit like a charm. A pretty woman
gleamed back at me from a scratchy
mirror. That woman dipped deep
into my summer savings and I rode home
not dowdy at all in the old
brown coat with the red glow warming me
right through the box.

I know what they’ll say, whispering
behind their hands—At her age!
Doesn’t she know she’s no spring chicken? Squandering
money on a coat that’ll show every speck
of dirt? I smile into the wind. The woman
wearing this red coat
won’t care.

I so love this poet, don’t you? I’ve read all of her books; check them out here on Amazon. There are many delights in their pages.

And doesn’t the painting fit well?

Now for the strange part. I didn’t really know a lot about Grant Wood so I read a short bio, and then looked up images of “Appraisal.” One led me to a blog, which led me to this article by Henry Adams in Arts & Antiques. Adam’s 2010 article is about a “remarkable” new biography of Grant Wood by Tripp Evans, Grant Wood, A Life (published by Knopf). Although it was mentioned in the Wikipedia bio that there was a “theory” Wood was a closeted homosexual, the article states that Evans was convinced. (Grant remained securely closeted because in those days homosexuality, even if you were a WWI war vet, as Grant was, could have you sent to prison, or condemn you to castration.) Evans’ book goes into that aspect of Wood’s life, and into surprising insights into his work. (I also learned that Wood’s Daughters of the Revolution showed our founding fathers in drag. Wood called it a satire.) Now for the big surprise. I learned that the farm woman in “Appraisal” was actually a fellow artist, the devilishly handsome Edward Rowan. From a bio on Rowan, I learned that he was a nationally-known leader of the arts during the Depression era and that he and Wood had met in Iowa (where Grant was from). Moreover, during a visit with Edward and his wife Leata at their summer home in the town of Eldon, Iowa, Grant Wood discovered the house that inspired his American Gothic masterpiece.

Wood and Edward’s friendship was the catalyst for the Stone City Art Colony in 1932-33. Rowan ultimately became the Assistant Chief of the Fine Arts Section, Federal Works Agency, Public Buildings Administration, and remained in that position through the 1940s. There Rowan supervised artists creating murals across America; ultimately there were over 1,000. Rowan, also a WWI vet, worked for veterans causes throughout his life.

It’s funny where a painting can lead you—and oh, the stories behind the art! 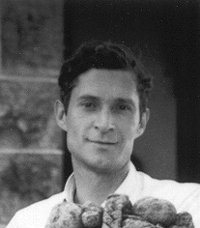