“Yes, we have wild turkeys on and around the ranch out here in Peyton!”

This week I was going through my emails and found one from one of Greenwoman Magazine’s most romantic writers, Tom Preble. Tom wrote about his Peyton, Colorado ranch in Greenwoman #3 (“Never Surrender!” – an exciting tale about hail on the Colorado Plains) and in Greenwoman #4 (“A Generous Season” – a story that’s as much about Tom’s love for his wife as it is about the bounty of his wife’s garden). More than one reader swooned a little while reading that tale!

It was sweet that Tom sent me these photos of his turkeys, and he said I could share them with you. 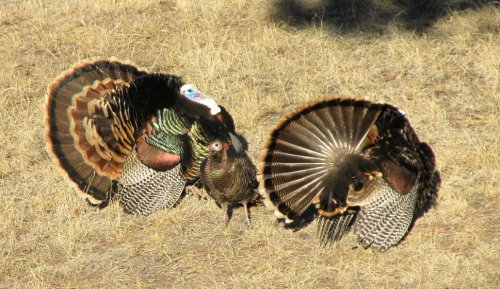 It seems here as if the toms are in competition for this hen. How puffed up they are!

Rancher/writer Tom Preble lives in his self-built, earth-bermed, and energy-efficient home and ranch on the Palmer Divide east of Colorado Springs. Something of a Renaissance Man, Tom has wide ranging interests, from astronomy to welding to philosophy. Trained as a computer electronics engineer and now semi-retired, Tom drives a school bus over the back roads of the Colorado prairies and observes and writes about his little friends on the bus.

Wishing you all a very Happy Thanksgiving,