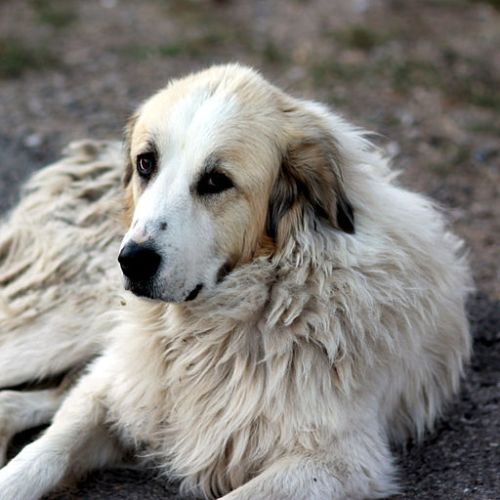 Not our zen doggie, but looks pretty zen.
By uıɐɾ ʞ ʇɐɯɐs from New York City, USA
“A Dog Near the Old Road Restaurant in Mescalero, NM” via Wikimedia Commons

As the Western Skies essays continue this summer, I found this lazy summer piece, reminding us to try to stay chill and appreciate the little connections.

My eleven-year-old daughter and I, out on a walk, were startled by a yell, “Hey, your dog’s in the road!”

We turned to see a man in black spandex slowing down on his bicycle. He nodded at a mutt headed our way.

The rider shrugged and pedaled off. The dog lumbered up. A big mutt with a sweet face, floppy wheat-hued ears, and fur clipped close to his body for the August heat. I guessed from his looks maybe some St. Bernard and German Shepherd. “Hi, there, boy,” I said. I gently grabbed his collar, noticed the dry patches of skin on his back. Ewww.

“Don’t know, Lily.” The tags jingled in the quiet Sunday afternoon. “There’s only a license and rabies tag.”

I didn’t want to end our walk when we were only two blocks into it, and I wasn’t keen on corralling a non-threatening but perhaps mange-ridden dog with our own. Surely, his owner would be cruising the street soon, calling for him. I’d been there, so had most of our neighbors—an unlatched gate or open door was an invitation for your dog to split. I released him and he padded purposefully in front of us. A slight limp and scrawny hindquarters said he was an old guy. I was pretty sure he wouldn’t do anything stupid.

He stuck with us. A block down he wandered into a yard with two women, one holding a baby. The young mother smiled until I said, “He’s not ours.” Then she clutched her baby to her chest. I’d alarmed her. Sorry, I thought.

We walked and the dog led, pausing every now and then to hike his leg, lagging behind, leading again. The blocks passed and Lily and I didn’t talk much—the dog commanded our attention. In a gravel parkway he stopped and squatted. Loose stools. “Oh, gross!” we exclaimed (now I really didn’t want to take him home). We continued. He paused to sniff a calico cat under a Jeep. A pretty blonde teenager smiled from the porch. “Oh, he’s cute,” she said.

Everyone noticed him, no one felt compelled to take him under their care.

Soon it was time to head back home. He’d been with us nine blocks, we had a mile walk back. We stopped at the corner, the dog kept going. “He’ll probably keep going,” I whispered.

“Why did you do that?” I scolded. We turned around, crossed the street, putting distance between us and tag-along. But he spotted us, ambled up again.

“If he follows us home, I’ll find his owner.”

We passed the girl on the porch again.

She laughed. “He’s still following you?” We crossed the street again, in a last attempt to shake him. It didn’t work. I knew he had to be thirsty. First thing I’d do when we got home was give him a bowl of water.

Two blocks from our house, he crossed the street and disappeared.

“That’s where he joined us. He’s going home.”

I was glad to be rid of him, but happy for his company. What was the nature of Zen Doggie? A mysterious geriatric escapee, or a serene, mystical visitor? The answer was clear. Just a fellow traveler, joining us on a Sunday afternoon.