The Dirt on “Dirt” 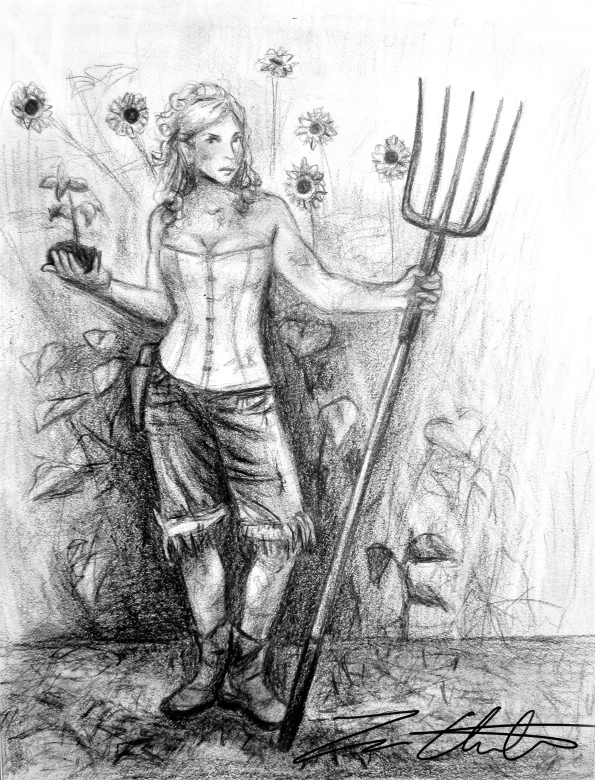 (This article first appeared in Greenwoman #3: The Victory of Dirt)

On his way home from a campaign, Napoleon Bonaparte wrote his wife, “Dear Josephine, I will be arriving home in three days. Don’t bathe . . .”

One of the dirtiest words in existence in the 1400s was “slut,” describing this unfortunate creature as a “dirty, slovenly or an untidy woman.” As I dream of the time I’ve spent in Colorado soil, fingers cracked, digging out the longest part of a dandelion root or picking purslane seedlings, one by one, like picking out gray hairs, I long for even that transference between weeds, soil, and the body. Am I a slut to the earth? Are gardeners mere sluts, wanton slaves to their soil? I wondered at other gardeners’ relationships to dirt and its sullied beginnings.

Let’s explore a “dirty” profile, find out where soil got a dirty name: My imaginary Victorian, let’s call her Lady Catherine, has nothing to do. She stopped her needlework years ago. She dabbled in painting and could barely get enough orange on a canvas to make an orange before she bored of it. Her mouth is something between a geisha’s pretty tied-up bow with the bottom lip too full and supple for anything other than kissing by wild princes (riding uncontrollably across craggy moors to save Lady Catherine from twisting her ankle) or, worse yet, ennui.

Underneath Lady Catherine’s many bandaged breasts (corsets, etc.) and her large dress-hoops is a sensual being that Victorian society deemed “dirty” and which by deeming it so converted the world under the dress, and at every gardener’s foot, as something unnatural. The most important virtue, in order to be of High Victorian society, as we all know from the scene when Scarlet is forced to show her grubby, working hands in Gone With the Wind, was to be the owner of a pale, lifeless hand that went limp and delicate in any suitor’s grip. Then it was swept up under his nose for the lightest and most normal of kisses. But wait, was that tongue?!!! I’m sure it was, recoils Lady Catherine, as she whips her porcelain fingers from the suitor’s lips. How dirty, she thinks. How invasive. How very naughty.

Dirt got really dirty in the Victorian era, stripping anything having to do with soil from it, thus vanquishing all roots between the natural, oozing, procuring earth and the natural, oozing and procuring body. You can read up on the era and its prude expectations of women by delving into any Austin or even Cooksin novel. Dirt existed, whether the Victorian prigs wanted it or not. Dirt will always prevail, regardless of moniker.

Who are we now, we tillers of the land, Gods and Goddesses with hands as roots, reaching and groping into the earth for its dark secrets, accidentally digging up a lost tulip bulb, finding coins from the ’70s, extracting someone else’s white landscaping rock to reveal a barren hardness that we must convert back to its humus soul? Dare we admit that we are, in fact, dirty minded? Have we entered into the truest scandal in gardendom?

And who ruined soil? There were just enough uber-sexual beings to keep the dirty connotation. A scandalous dirt fetish is recorded between a Victorian-era barrister and his scullery maid in Wellcome Collection’s London exhibition a few years back which explored attitudes about dirt (“Dirt: the filthy reality of everyday life.”) London journalist Giovanna Dunmall  wrote about the exhibit:

“Our 21st-century preoccupation with germs and cleanliness is clearly not a new one . . . There is hardly a dull moment in this exploration of filth . . .[for example] letters detailing the bizarre 40-year relationship, and eventual marriage, between barrister Arthur Munby and scullery maid Hannah Cullwick in Victorian London. The former had a thing for working-class women whose jobs involved hard, physical labour and there are photographs of Cullwick dressed as a chimney sweep or posing covered in soot and dirt.”

Anyone walking through the streets of London at the time either were used to grime, (perhaps being one with it or dying by it?) and some carried a perfumed kerchief or nosegay to cover the stench of foul conditions. So many maladies stemmed from “dirt” that it was easily equated with filth. Before penicillin and sanitary drainage, it was an honest mistake; however, in our current society, worries about getting dirty in the garden bed stifles soil’s natural yearnings. When I speak to real gardeners, and this is from the beginner through the pro, they always mention how important it is to get their “hands in the soil.”  Especially after winter’s thaw, spring stirs something in every gardener’s soul.  For me, I constantly check the surface of the yard, kick it with a toe.  Does it divot, indent?  I take a shoe off and dip my naked toe.  Does it accept any entrance?

The different constitutions of loam, clay, sand, and organic matter implant themselves in my dreams so that I wake with their dark, dusky smell in the mornings, hoping I can get into the dirt. One gardener calls this tactile transfer a communication with the soil.  Tamara Mahoney, long-time certified Colorado master gardener has this to say, “Nothing calms my nerves or relieves my stress more than getting my hands in the dirt for a little bit. I love fresh carrots just dug out of my garden and washed in the garden hose . . . they taste like the dirt they have been growing in. No store-bought carrot ever tastes as good!”

Tasting the dirt is not the only vice we dirt worshipers have, but it’s a good one. Patricia Hampl stands up for eating a peck of dirt (a full two gallons) in her memoir A Romantic Education. She wrote about her grandparent’s dark and tuber-producing garden. “I ate dirt there. This is the first taste I remember.” After dropping a jawbreaker around the corner, the owner had said, “Well, you have to eat a peck of dirt before you die. “ After that, Hampl reflected on death and dirt and pictured herself without the proper amount. She ruminates, “So I ate dirt. I also ate it out of curiosity, putting it on my tongue like brown sugar and waiting hopelessly for it to melt.”

Our society and the media continue to sell us alcohol and other toxic cleaners to rid our hands of germs. Gardening gloves, like the corset, hinder transference. To combat dirt’s bad connotation, it’s not enough to just commune with the soil. Chuck Rise of Soil Science of America writes about soil’s healthy properties and that, ironically, many antibiotics come from soil. Under our feet, and indeed, in our hands as gardeners, we touch the key to existence itself. Rice asks us, “Did you know that there are more living individual organisms in a tablespoon of soil than there are people on the earth? A teaspoon of soil contains over 1 billion bacteria yet we know only 1%. The remaining 99% are unknown and contain a treasure trove of products.”

I have so many friends who are new to dirt and slowly succumb to its call, accepting the lure, and therefore scandal, into their lives, but jump into their soil too soon, without finding out what it will do first. One such gardener had bad luck. On the Laguna Dirt blog, Janine Robinson even admits defeat when she didn’t gauge her soil correctly. Kind of like going out in the middle of winter in a spaghetti strap dress. Sure, you’ll ensnare a dude, but what kind of dude will he be?

“I started a winter vegetable garden in early November, and blogged about how I built the raised bed on top of my concrete patio, using concrete block . . . I filled it with seedlings and seeds, but even after weeks of rain and warm temps, things barely grew. With the help of some gardening friend experts, I learned my soil was way too compact, allowing little drainage and oxygen.”

I’ve made the same mistakes, stripping my gloves off, digging small holes to plop a seed that never has room enough to spread and writhe. I learned, in the clay neighborhoods of Denver, that Eko clay-buster was just going to be my heavy companion while I labored, digging up clods, sweating into the earth, getting in deep and mixing the two: old sad, dried-up souls with new vigor. The result admitted any seed, enveloped, and pushed out my ornamental horehound, my monkey flower, reaching straight up out of my dirty mind.

I needed to find other dirty minds in the search for support. That’s not hard when talking to gardeners. Ross Shrigley, Senior Horticulturist at Denver Botanic Gardens, agreed with the notion that dirt can’t be bought, but must be manipulated. He writes,

“I know it’s the soil because fresh potting soil doesn’t deliver the same sensation for me. Potting soil just seems like work.” He relates that when speaking to clients he tells them of “ . . . the sensual feelings I have when a garden bed is prepared properly. It’s digging and planting with only my hands in that bed that pushes the high until all is planted. Climax is reached when I stand back and look at it, and know what is to come.”

We can be captured by dirt’s call, succumb to all its earthy needs. Every spring, we are virgins anew and let our minds go deeply astray. From all outside appearances, our Lady Catherine still doesn’t know what to do with that kiss on the hand, but within, there is a deep knowledge of her body.  We own such knowledge now, coming back to our dirt, manipulating carnally, heaving ourselves, letting the earth dominate us until we can harvest and eat its sweet offerings.

Our acceptance, our carnal deeds don’t go unrewarded. Shrigley also told me, at the end of planting, the reward of our earthen relationship, our dance, after we’ve let ourselves get soiled, planting beds, learning our soils, is rejoicing at earth’s reward. Shrigley states, “When I prepare a bed, I imagine it as my wife describes the great sensation of shaving her legs and climbing into the clean sheets of a nicely made bed. I can easily imagine her sensation when she climbs in and I picture myself being the sheets. That’s the sensation I seek when I properly prep a garden bed.”

Lady Catherine would outwardly be appalled, touch her laced glove to her lips and intake breath. As the gardener is raking clods of moist earth in front of her, shirtless, a new world awakens under and inside, where she has the fantasy of rolling with him, dirt and all, in the flower bed. Born in Northern California, Elisabeth Kinsey was raised amongst her Italian and Jewish families. Her parents converted to Mormonism, which is the basis of her memoir: The Holy Ghost Goes to Bed at Midnight: Half a Mormon Life, that she is now shopping around to agents.
She has a BA in Writing from Metropolitan State University of Denver and a MA in Creative Writing from Regis University. She teaches writing and composition.
Her published works appear in Greenwoman Magazine, Ask Me About My Divorce,Seal Press, Wazee Journal, The Rambler, and Emergency Press among other journals.
Elisabeth can be called upon to speak about: divorce, leaving a strict religion, zone 5 gardening, Italian cooking, and andragogy.
* * *