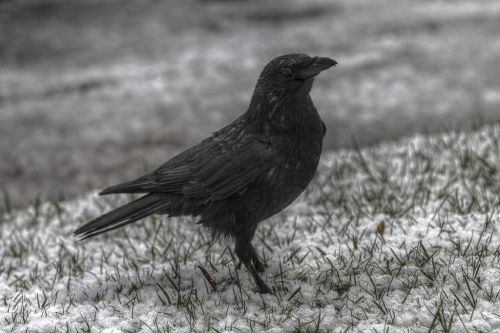 “A Carrion Crow Under Snow in Annecy” by Pierre Selim, via Wikimedia Commons.

A towhee’s red-rim eye caught sun yesterday,
relentless before the rain followed up

a moonless night of clouds
buffering the barred owl’s call.

the chimney crown, drumming
his way to sex and vaunted chests.

A stellar jay follows my sleight of hand
feeding the crows on the mailbox,

through ice and several feet of snow.
The crows who like the fat the best

and for whom I ate the bacon.