The Woods With No Name 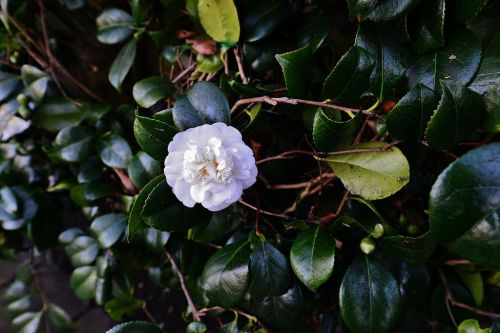 “Hever Castle and Gardens, A White Camellia” by Michael Garlick, via Wikimedia Commons

The Woods With No Name

Morning coffee and my attempt to think of news as stones
that I can shake through a screen to separate
pea gravel from those as big as eggs or golf balls.
The pope gifting his thoughts on climate change.
A man running for Congress assaulting a reporter.
Budget chicanery and bells that toll in Manchester.
All the rocks stayed upside the screen, glommed
to words I meant to string up for a social justice website.

I went to a woods, the woods with no name
where thought senses soft breezes, old firs,
and a few tall weeds. Bending toward the sun,
at the edge of the woods, a camellia that dropped
white blooms weeks ago. Dead twigs as innards,
branches the snow snapped or draped onto the mud.

Thinking in visuals. Open a sightline
to the obelisk raised for a dead son. Gut
what is dead or yellowed. Help what bowed
in defeat to lift up again. Encourage nodes that promise
next year’s bloom, next year’s leaves.

When I was done, a pleasing camellia poem
stood on the verge of the woods with no name.
Pruned so that no one would say who did that?
what happened? Pruned to a shape it yearned
to be but somehow lost in the traffic of daily life.

In summer 2017 Tricia’s new book, Broadfork Farm, is coming out from The Poetry Box. It salutes life on a small organic farm in Trout Lake, Washington.

Tagged as The Woods With No Name, Tricia Knoll