In the crystal light of morning I look to the mountains.
The earth has been cut open, it is bleeding red.
the snow is like a blanket covering the dread.

In this shimmering, frigid air I can see the veil between us and them.

This ancient earth and the ancient humans abhor the modern world that is now.

The earth is alive. The broken open skin of the earth cries because of these atrocities.

Photo of Ginger and Gretchen by Skee Hipszky.

Virginia (Ginger) A. Hipszky was born in 1960 in Franklin, Indiana. She relocated to Colorado Springs, Colorado in December 1979. She has one daughter and two stepsons. Various interests include reading, collecting modern and ancient coins, amateur radio, book proofreading, and collecting rocks and fossils. Meteorology and astronomy are two of her favorite passions, and she also enjoys writing poems and prose.

Note from the Editor: I met Ginger a couple of weeks ago at a mutual friend’s art sale. She told us of a poem that had come to her, inspired by that morning’s view of the first significant snow of the season on a mining site nearby. I found the poem captivating and asked her if I could publish it here. Ginger said yes, and then wrote a little about how it came about in an email: “When the sun first comes up, it turns the exposed granite pink. . . [The poem] just came to me. I felt anxious all day till the words got out and on paper.”

Everyone in Colorado Springs, Colorado is familiar with the mining scar of Queens Canyon Quarry, not far from the one in Ginger’s poem. During a little research I found an article that told how that quarry was mined for limestone, to be used in the concrete foundations of buildings at the Air Force Academy, the Colorado Springs Airport and NORAD (and, I’d add, tens of thousands of homes and businesses). The article stated that in 1966 when Stewart Udall, then Secretary of the Interior, visited here he dubbed our city as “the city with a scar”. For many decades people remarked on its ugliness and how it marred a landscape that held, so close by, geologic wonders like our Garden of the Gods and Pikes Peak. Here’s the link to that article if you’d like to read about how 20,000 hours of volunteer labor went into reclamation of that area below. The good news is that now you can actually see trees growing on this area. 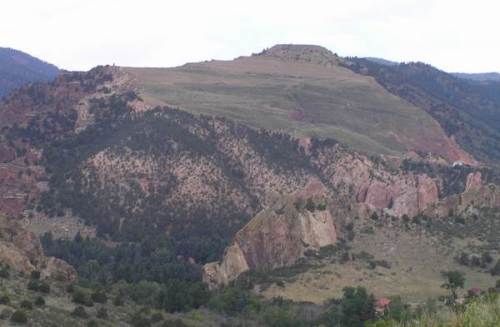 Queens Canyon Quary, Image from ImFromColorado.com. Another discovery I made is that it is very difficult to find images of the scars. Understandably, they are not something people enjoy photographing.

As the YA author John Green wrote, “The marks humans leave are too often scars.”

2 responses to “Crystal Light of Morning”