A Little Nonsense with Edward Lear

I thought I’d share some nonsense, but then it turned a bit serious. I’m referring to Edward Lear.

In the next issue of Greenwoman we’ll be publishing a few illustrations from Lear’s book, Nonsense Botany. I thought I’d share some other illustrations, to give you a taste of his nonsense, and then write a little about Lear.

A few of his illustrations: 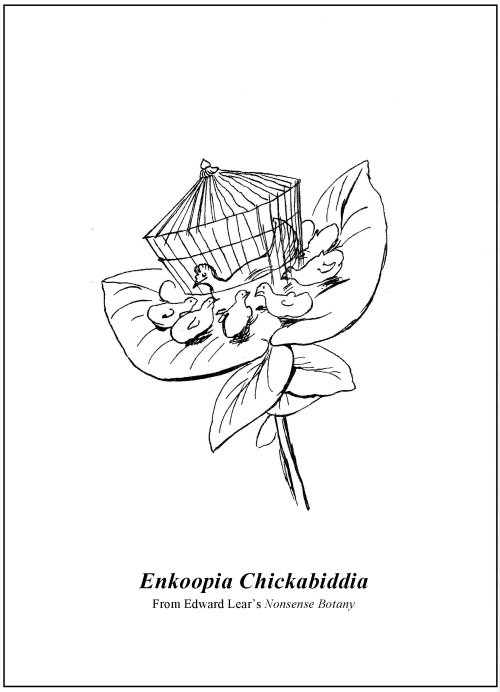 I knew his nonsense poem, “The Owl and the Pussycat,” well. It is one of my favorite rhymes. When I read his biography, I learned that he was (as I often discover about artists) more amazing and interesting than I imagined. I did not know the more serious aspects of Edward Lear.

He was born in 1812, in Holloway, England, the penultimate (I learned that means second-to-last) of 21 children born to a middle-class English family. He was raised by his oldest sister Ann (who was 21 years older than Edward), and when he was four he left with Ann permanently, due to family financial troubles. His sister would play the role of doting mother in his life until her death some 50 years later.

Lear’s life was plagued with many health problems, including grand mal epileptic seizures (starting at age 6), bronchitis, asthma, and, later in his life, partial blindness. He was frightened and ashamed of his epileptic condition, and according to his adult diaries if he felt a seizure coming on he would leave as to not have any witnesses. Not surprisingly, with all he had to contend with, he also suffered from depression, starting at age seven.

In spite of these afflictions, he was hardworking and a highly skilled artist by an early age. By age 16 he was earning his own “bread and cheese” through his drawings. Not long after that he was employed by the Zoological Society as a serious “ornithological draughtsman.” Lear’s first publication was Illustrations of the Family of Psittacidae, or Parrots in 1830. He was 19 years old and his work was favorably compared to that of John James Audubon.

You can find all forty-two lithographic plates (drawn from life, and on stone) here at the Digital Library for the Decorative Arts and Material Culture and also through Wikimedia Commons.

He was also a fine landscape painter:

Throughout his life Lear painted and traveled widely. Near the end of his life he realized a lifelong dream, to illustrate a volume of Alfred Tennyson’s poems.

Lear’s love interests centered upon men and his most “fervent and painful relationship” was his platonic bond with Franklin Lushington. They met in 1849 in Malta and Lear fell in love. He spent some time touring with the young barrister through southern Greece, but Lushington did not reciprocate Lear’s feelings.  Nevertheless, the two were friends for almost 40 years, until Lear’s death. Edward Lear never married although he proposed to a woman twice. (This must have been late in his life as the woman was reported to be 46 years his junior. Both offers of marriage were turned down.)

In the 1870s, declining in health, he made his final home in San Remo, a coastal city in north-western Italy, best known as a tourist destination on the Italian Riviera. Lear named his villa “Villa Tennyson.”

He died there in 1888, of heart disease. He is buried in the Cemetery Foce in San Remo.

Lear’s headstone is inscribed with four lines from Tennyson’s poem To E.L. [Edward Lear], On His Travels in Greece: It references Mount Tomohrit in Albania:

Tomohrit, Athos, all things fair.
With such a pencil, such a pen.
You shadow forth to distant men,
I read and felt that I was there.

To leave on a happy note, I’ll end with his most famous poem. (By the way, “runcible,” as in “runcible spoon” is one of the delightful nonsense words Lear invented.)

The Owl and the Pussy-Cat

I
The Owl and the Pussy-cat went to sea
In a beautiful pea-green boat,
They took some honey, and plenty of money,
Wrapped up in a five-pound note.
The Owl looked up to the stars above,
And sang to a small guitar,
“O lovely Pussy! O Pussy, my love,
What a beautiful Pussy you are,
You are,
You are!

What a beautiful Pussy you are!”

Pussy said to the Owl, “You elegant fowl!
How charmingly sweet you sing!
O let us be married! too long we have tarried:
But what shall we do for a ring?”
They sailed away, for a year and a day,
To the land where the Bong-Tree grows
And there in a wood a Piggy-wig stood
With a ring at the end of his nose,
His nose,
His nose,

With a ring at the end of his nose.

Filed under Art & the Garden, Garden Writers We Love