Creating the Greenwoman Doll – Part I

It’s been the best of times and the worst of times to start a new business.

I’d been working on my new venture, Greenwoman Market, all through the winter. It is a a business that promotes earth-friendly Colorado businesses (you can read about it here). The launch was set for March, with the first big debut event scheduled for Saturday, March 14th.

Tragically, Colorado had its first death from COVID-19 on March 12th. Events were cancelled, one by one, in rapid succession.

My launch would not include gardening events and farmers markets; it would be via emails and social media.

Like many businesses owners I had to come up with new ideas, fast, and put my faith in “it’s all figureoutable.” Two weeks ago, I found myself chatting (well, Facebook messaging) with my sister-in-law, Sally Cato. She had seen the article mentioned above, and we were discussion marketing. When I mentioned that I couldn’t wait to visit some of these Colorado businesses and take photos for the new Instagram account I’d set up, even if I had to wear a mask and gloves, she asked if I had a Greenwoman statue that I could take with me to use in the photos.

“What a brilliant idea!” I wrote. I thought of those kidnapped globe-trotting gnomes that were a sensation in the 1990s. This is a fun idea! But no, I answered, I didn’t have a statue. We brainstormed; searched for appropriate figurines on Etsy and eBay. We considered a Mother Earth/Gaia, a green fairy . . . nothing seemed right.

Sally then suggested that I create something unique, something that couldn’t be easily copied. I agreed; that would be the way to go. That afternoon I messaged artist friends and learned how creating a one-of-a-kind small statue or figurine is not hard to accomplish these days. You could adapt something already made with air dry clay and you could create a resin mold. I was thinking that it could get expensive, but I was already committed to the idea—at least in seeing what the possibilities were for now. Maybe I could figure out what I wanted to do and save the money to do it before this summer.

As I puzzled over how to move forward, I told my daughter Zora about it. She said, “Why don’t you do a Barbie?”

Two brilliant ideas in one day! I remembered seeing an article about an artist who personalized dolls, stripped off their face paint, and repainted them to look realistic, changed their hair. This could be easier than I thought! This could be do-able now!

I looked in Etsy and found an artist, Bee Hale of Bee Real Dolls.

I really loved her work. Here’s what she did with a Made to Move Barbie, transforming it into Meghan Markle. 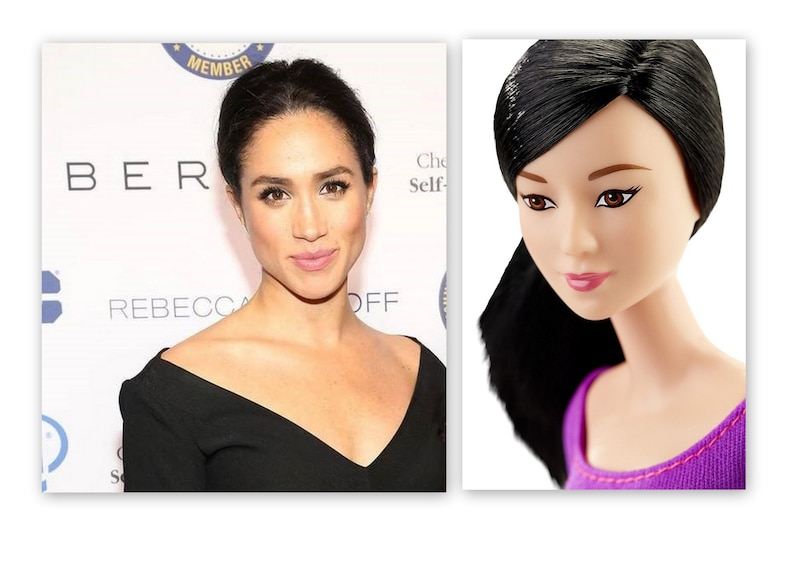 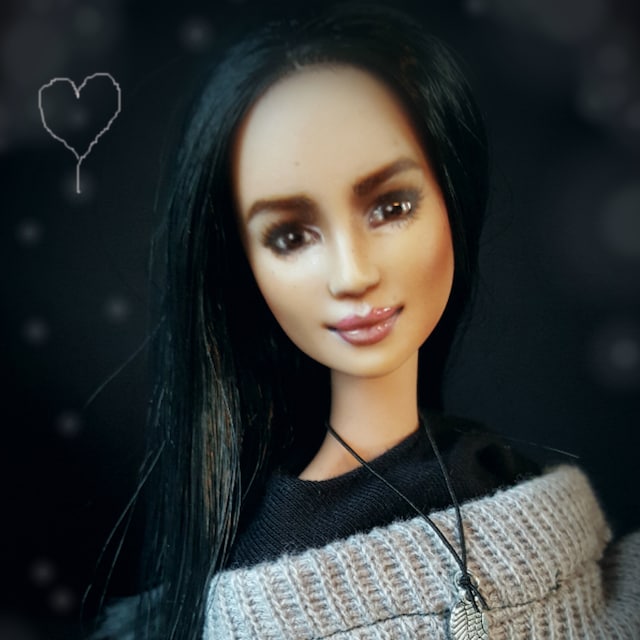 I wanted my doll to look like the Greenwoman logo.

A little backstory: Greenwoman Publishing’s logo was inspired by antique drawings of the legendary Picts—Celts who painted their bodies before going into battle. The images of these women warriors resonated with me; their bodies displayed natural and celestial designs, their vibe both lovely and ferocious. Here, I thought, was a female who could represent Greenwoman!

Another interpretation, A Young Daughter of the Picts, by Jacques Le Moyne, circa 1585.

Jacques Le Moyne’s illustration, the all-over floral, was purely from his imagination (Le Moyne was a student of botany and ethnology). The first version is undoubtedly more accurate, but no one knows how much is lore, how much is fact. There’s almost no written history on the Picts, and some accounts read more like gossip.

(It didn’t matter; I loved the concept.)

Could Bee translate these logos into a doll? I felt she could. I took the plunge and commissioned an order.

Bee recommended a Made to Move Barbie (very pose-able, which would be perfect for photo shoots). We both knew she had to be a more realistically proportioned, curvy Barbie!

The first question had to do with the bust size. Should I go for large breasts like the full-figured logo? Motherly breasts? My instinct was yes, and Sally also thought she should be round like an Earth Mother. I learned that Bee could make these modifications.

Should I or shouldn’t I?

I ordered a bigger bust line.

Then my daughters, in their 20s (and not mamas yet), disagreed. They said the mascot, which would basically be an Instagram model, should be “cuter,” less voluptuous, more family friendly. We looked up the Made to Move curvy Barbie and they liked the shape. So did I.

Within a week, Bee (in England) had received the doll. She sent some photos. She re-rooted her hair, making it longer, right away. I loved the body shape.

Bee offered to make a bra top and skirt from some small print leaf fabric she had. I said that would be wonderful.

We decided the foliage tattoos would be earth tones, brown and green. When seeing the doll with more fabric samples, I thought that another leaf print (that I had okayed before seeing the doll with the prints) might turn out to be garish. Bee agreed, saying the colors of the tattoos and fabric could clash. I left the decision of what fabric to use with Bee.

Again, I agreed. Green they should be. I sent another note to Bee.

Our mascot and some fabric samples.

Her face, body tattoos, and clothing are coming soon! (Then I have to wait for her to arrive from England).

I played with Barbies a few times as a child but I never owned one. When I was at the age when I wanted them (ages 7-10), we were poor and couldn’t afford them, and by the time I was 11, and earning my own money through babysitting and chores, I had outgrown dolls. Now I find myself very excited to see what comes next! I’ve even ordered her a few outfits and a couple of inexpensive flower crowns. (I couldn’t resist!)

I am excited to see what Bee creates.

I also discovered that our mascot will have to have a proper name. That will be a fun contest down the road. For now, we wait for the next step . . .

Which includes, in the next post, finding out a little about the artist! ❤