(When I read Virginia’s poem, I thought of another big celestial event that’s happening on August 21st – a total solar eclipse. Virginia reminded me that there would also be a Perseid meteor shower on the night of August 12th/early August 13th. – SK)

Vibrant sphere of light
Slowly arcs across the heavens,
Casting paths of silver beams.
Ancient traveler over distant lands.
Mute observer, eyes cast down,
Mouth turned up in patient smile,
Silent witness to our lives,
Father of the midnight sky.

Virginia Gambardella lives in New York. She has one son and three grandchildren and enjoys: people, holidays, antiques, nature, gardening, fishing, decorating, fashion, sharing knowledge, cooking and baking. She’s a cancer survivor, a pancreatitis survivor, a widow, and the re-inventor of her life, “as necessary.”

In the Flowery Garden With My Calico Cat 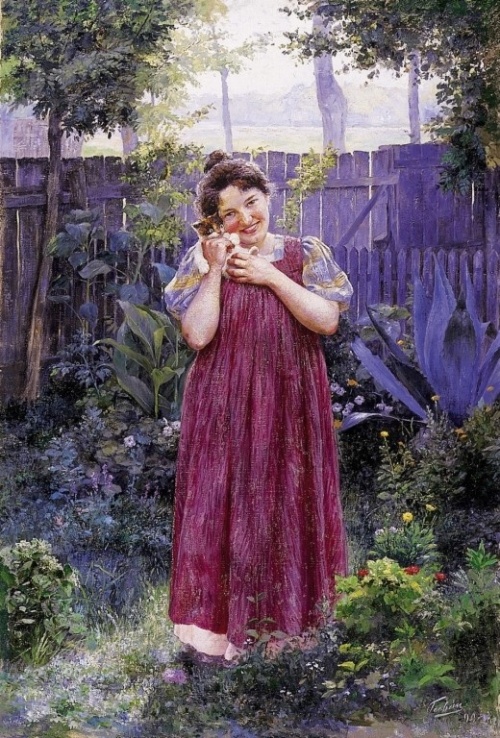 József Pechán, “In the Flowery Garden With My Panelvourite Cat”, 1899

I discovered this József Pechán painting browsing Wikimedia Commons. I could not find that the word “panelvourite” translated into calico, but it makes sense, doesn’t it? Of course, I could be wrong.

I loved this painting – the colors, the happy woman and kitten, and that aloe! We all love our gardens.

József Pechán was born on February 21, 1875 in , Dunacséb, Hungary (so he was 24 when he painted the above painting), and died on March 6, 1922 in Verbász. Both cities are now in Serbia. This was the only painting I found with a garden-theme, though I didn’t do a thorough search.

I found the history on where he was born and died, Hungary, interesting (and sad) [from Wikipedia Commons]: “Hungary’s current borders were established in 1920 by the Treaty of Trianon after World War I, when the country lost 71% of its territory, 58% of its population, and 32% of ethnic Hungarians. Following the interwar period, Hungary joined the Axis Powers in World War II, suffering significant damage and casualties. Hungary became a satellite state of the Soviet Union, which contributed to the establishment of a four-decade-long communist dictatorship (1947–1989). The country gained widespread international attention regarding the Revolution of 1956 and the seminal opening of its previously-restricted border with Austria in 1989, which accelerated the collapse of the Eastern Bloc. On 23 October 1989, Hungary became again a democraticparliamentary republic.”

So, there it is – is a little art for the soul, and a history lesson.

On a personal note: I hope you are all doing well. I received an email from a reader/contributor wondering about me, because she hadn’t seen a Flora’s Forum post in a while. There have been personal issues going on (an illegal two-story house has been built next door to our home and garden that has stolen our privacy, and we’ve been dealing with that, read about what’s going on here, if you’re interested), but as far as health, I am fine and dandy! I hope you are, too!

Tagged as In the Flowery Garden With My Calico Cat, József Pechán, Painting