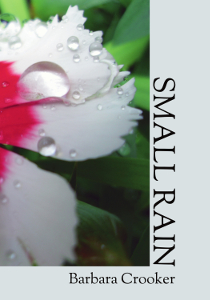 I was happy to hear that Barbara Crooker, whose poetry has been read many times by Garrison Keillor on The Writer’s Almanac and has also appeared in Greenwoman, has a new book out, Small Rain. Crooker’s sixth book of poetry, is described as “an exploration of the wheel of the year, the seasons that roll in a continuous circle and yet move inexorably forward. Here, gorgeous lyric poems praise poppies, mockingbirds, nectarines, mulch and compost, yet loss (stillbirth, cancer, emphysema), with its crow-black wings, is also always present.” I read her book yesterday and the writing is sublime, the themes deep. I recommend it highly.

Barbara agreed to share a couple of poems today, along with some insight into her gardening life. Thank you, Barbara! 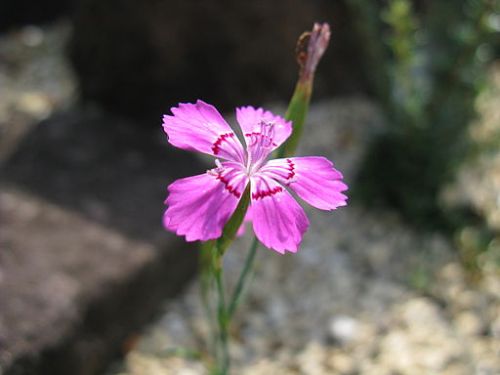 My mother comes back as a dianthus,
only this time, she’s happy, smelling like cloves,
fringed and candy-striped with a ring of deep rose
that bleeds into the outer petals.  She dances
in the wind without her walker, nods pinkly
to the bluebells.  She breathes easily, untethered
to oxygen’s snaking vines.  Lacking bones,
there’s nothing left to crumble; she’s supple,
stem and leaf.  No meals to plan, shop for, prepare;
everything she needs is at her feet, more rich and moist
than a chocolate cake.  How much simpler
it would have been to be a flower in the first place,
with nothing to do but sit in the sun and shine.

The garden is a source of deep pleasure, and is also a source for many poems. In the front landscaping (azaleas, rhododendron, mountain laurel, holly), I usually plant annuals. When my mother was in a nursing home at the end, a visitor brought her a pot of pinks (dianthus), and she gave them to me to take home. After she passed, I planted them outside, and was delighted to see them come back after the first harsh winter.  She’s been gone almost seven years now, but I feel her presence keenly when they open their pink skirts, and dance in the May wind. 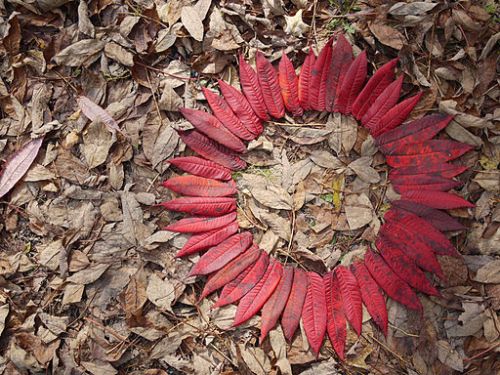 Autumn returns, and again we are cast thistledown together
on the winds, wrote Tu Fu in 755 AD, and I feel the cold air
blowing, the years falling by like so many yellow leaves.
Down in the meadow, some larkspur, a few black-eyed Susans
still bloom, but it’s late in the season, everything
going to seed.  The afternoon sun licks strips
of gold on my arms.  A drowsy silence, hummed
by bees. The thunk of an apple, finally ripe, falling.
We tilt at the balancing point, between summer’s too-much
and winter’s not-enough; the sumac flickers red in the hedgerow.
Last sweet raspberries.  The old cherry tree turning orange
peach orchid gold, a sunset of leaves.  Small sulphur butterflies
dance on the lawn.  Who could paint a sky this blue?
The pages of my notebook flutter in the breeze.

This poem pretty much describes my back yard, or some of it:  the little wildflower meadow I replant every year (corn poppies, California poppies (another poem in Small Rain uses them as the subject), Icelandic poppies, cornflowers, larkspur, coreopsis, rudbeckia), the old apple orchard (on retirement, my husband added two more apple trees, two pears, two peaches, one plum, one sweet and one sour pie cherry), the sumac (and goldenrod, thistle, milkweed) in the wild hedgerow, and the raspberry patch we put in almost forty years ago. When we bought this house way back then, the developer put sod in the front plus five small shrubs, and gave us a bag of grass seed for the back.  Everything else we put in ourselves, using a pick axe to break through the shale. The old cherry tree in this poem was put in the first year we lived here, but it split apart in a storm and has been replaced by a newer one.

And a dogwood tree.  Hundreds of bulbs are mixed in; I like to have flowers from February to frost.  And there’s a compost bin (also a poem about it in this book).  Of course, you don’t see the enemies:  voles, rabbits, skunks (the callas need bone meal to flower; the skunks love to snack on this), and deer. . . . 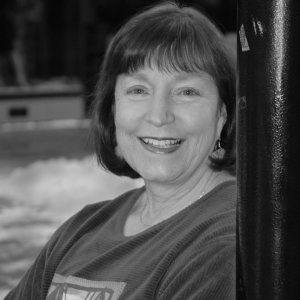 You can get a signed copy of Small Rain from Barbara at bcrooker@ptd.net, or via Amazon http://goo.gl/CvtA4W,